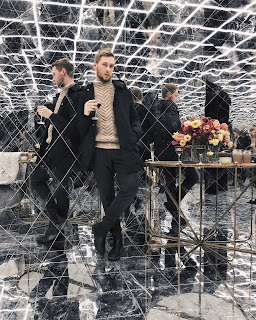 New York, New York — it’s a hell of a town. And a hell of a housing market. As a part-time resident, Tomas Maier surely knows that. Nevertheless, when he decided to show his Bottega Veneta collection here to mark the opening of the brand’s new flagship on Madison Avenue, he wanted to show in a home-like setting, the apartment of an imaginary urbane Italian with a penchant for Milanese chic crossed with exotica acquired from global travels.

Maier thus undertook the hunt for a location where such an apartment could be created; it would have to meet specific parameters — soaring ceilings and no columns. He found only two possibilities and chose the American Stock Exchange building. Along with Alex de Betak, who typically works on Bottega’s shows, Maier brought in Broadway set designer Scott Pask for the project.

That’s an unfortunate reality of staging shows intended as mega, never-before events — when glitches happen, they become the lead talking point in post-mortem conversation, even when the clothes are good. And Maier’s were superior. The apartment was set on a raised platform, and the models walked its perimeter before settling into one of several tony seating areas. From the front row, you could get only the broad-stroke gist; here was a celebration of individuality as befits the diverse personality types who populate New York. First look out: classic silk pajamas reimagined as an elegant onesie under a camel coat, intended to capture the idea of a woman “throwing a coat on top of your pajamas and walking out to get a coffee or take the dog to the park,” Maier said during a preview. 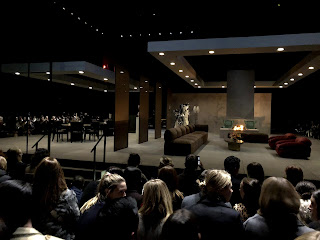 Overall, he noted as inspiration a “brave New Yorker who gets out there and is not afraid to make a statement and stand out against the big crowd.” He also cited his ongoing interest in architecture, referenced here in a recurring cube motif that started from “a stone going into the ground, and the idea of tri-dimension.”

The Bottega customer is a woman or a man — it was a coed show — of high expectations, which fall’s lineup promised to exceed. Maier’s palette worked the wearable side of flamboyance — marigold, wine, purple; his silhouettes shunned citified cliché; no Wall Street suitings here. Rather, he opted for relaxed shapes and intense surface interest. A skirt was embroidered with a demonstrative, artisanal riff on the cube motif. A dress featured two overlays of fabric cut away into geometric motifs; another contrasted shiny and velvet sequins. Fine outlines on dresses and skirts that at first glance looked like stitching were actually delicate chain embroideries. 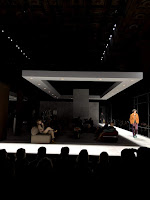 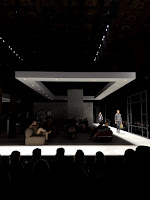 While Maier referred to his tailoring as sharp, it had an off-beat zip, as in a double-breasted orange suit with multiple, demonstrative pockets. The coats were fabulous, almost all bonded fabrics that looked different outside and in, delivering that intimate luxury for which Bottega is famous: camel mohair and wool tiger stripes were bonded to satin; crinkled orchid satin to gray felt. 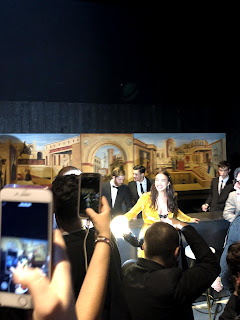 Maier’s men’s wear reflected a similar fusion of “notice me” confidence with adult sophistication. The designer focused on sportswear looks anchored by an impressive array of jackets and coats, including several shearlings printed with zebra stripes. The cube motif surfaced in a grid pattern etched on a red tailored jacket over bright yellow pants, as well as bold color blocks for pants and a coat. 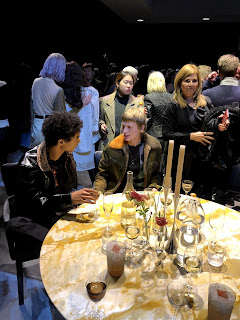 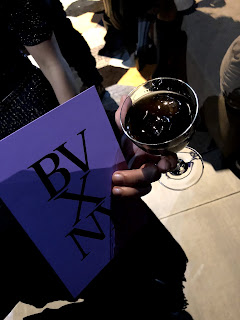 Immediately after the show, guests stormed the apartment elevation, some as the quickest path to the exit, and many to enjoy the post-show party. Instantly, a host of waiters appeared, ready to oblige with trays of various nibbles and libations. Because a sturdy cocktail will always be a part of New York life.