By mykola - February 05, 2016
And that’s a wrap on another menswear season. The bi-annual rounds, which began in London a month ago, just concluded last night in New York at the Todd Snyder show after a standout sophomore season of New York Fashion Week: Men’s. The four-day onslaught of runways and presentations showcased a mass variety of styles and wares, from oversized outerwear to delightful new takes on tailoring and evening attire.

The Council of Fashion Designers of America launched New York Fashion Week: Men’s, a standalone showcase for American men’s fashion which kicked off with the Spring/Summer 2016 collections at Skylight Clarkson Sq. The sophomore season was held February 1-4 at Skylight Clarkson North.

This season, Concept Korea presented two menswear designers, DBYD by Dong-jun Kang and Ordinary People by Hyeong-cheol Jang. DBYD’s I’m yours and I’m not yours collection focused on changing colors based on mood and emotion from Spike Jonze’s film HER.
Ordinary People’s Hotel People brings the audience into a world of sanguine and uplifted feelings. The collection tells the story of the people in a modern boutique hotel and the lifestyle accompanied with the holiday times.

The SuitSupply presentation at their Soho store on Broome street. The focus of the presentation was a grey and light brown color palette that consisted of lots of prints. The main print that stood out was herringbone which is perfect for the fall winter season as its tweed cloth is thick yet durbale and comfortable.

In its debut collection, Deveaux, a new brand from the founders of Carson Street Clothiers, presented a lineup full of retail-friendly pieces that hit some of the key trends of the season. An elongated cardigan in cashmere worn with a wool/silk T-shirt and gray wool herringbone pants was a standout, and the monochrome color palette lent a luxe feel to the collection. Numerous statement outerwear items such as bomber jackets in pebble shearling and raglan belted car coats in suede gave the lineup an upscale and romantic feel. This first effort is definitely a move in the right direction. Source 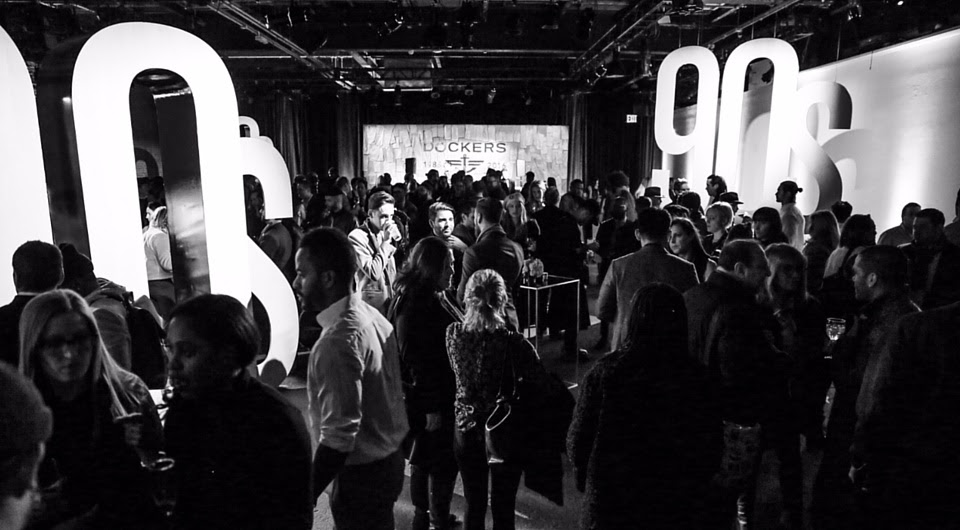 To mark the momentous anniversary, Dockers debuted a new ad campaign ("Yes, They're Dockers") and a special 30th Anniversary Collection, which included reimagined classics like a trench coat and weekender bag, in their timeless khaki color.

Joseph Abboud paid homage to his vision of America with a tailored, clothing-driven show bursting with a multitude of textured fabrics, prints and playful layering techniques. He used his traditional gray and brown palette in a wide range of traditional men’s wear patterns, ranging from pinstripes and tweeds to embellished paisleys. His love for layering scarves added another element of depth. Although at times overwhelming, a shawl-like gray American flag brought home the message of his U.S. roots. Source

Fashion belongs to the people. And Public School is getting ever closer to its fans. A large group of followers and fashion students lined the street outside the glass-enclosed backstage area and were the first ones to see the looks. The models exited from the rear and marched around the block before entering the official venue.

That spirit of survival was apparent in the use of camouflage in T-shirts, zip-up blazers and bomber jackets.Utility aspects such as Velcro closures on an oversize anorak, and an abundance of quilting reinforced the protectionist spirit.

The heritage streetwear influence and athletic references still resonated in the tailored pieces, which Chow said had a more-sporty silhouette, as well as the elegant layering effects. The balance between the innovation of the collection and the trendsetting show format reinforced Public School’s ability to lead the way in fashion and keep an ongoing connection with the street culture.Source

The stage was set before the show started with an opening video of the sea that morphed into a collage of buildings and bridges. This juxtaposition of the water and the city was the inspiration for Nautica’s fall collection, whose new marching order is: “Inspired by the sea, designed in the city.”

Designer Steve McSween said he sought to “make an elegant mark with nautical references fused throughout.” That translated into signature cable-knit sweaters in luxurious twisted cashmere, and pea coats, duffles and utility jackets in wool.

One particular standout was a winter white wool admiral coat paired with a mohair and merino turtleneck and a twill officer pant.

In a season when military references are all over the men’s runways, Cadet remains true to its signature utilitarian aesthetic. The look worked best on cropped uniform jackets, form-fitting jumpsuits and textured Henleys updated with inset zippers.
Although at times costume-y, the play on proportions in soft wool topcoats, belted safari jackets and cropped pants brought the collection into everyday life.
But the brand missed the mark on its tailored offering, with suits that fit poorly and lacked the military precision of the rest of the collection.
This was the first time Cadet infused silk into trousers for both men and women, which added a refined touch.
For women, some of the highlights included an open-weave long dress, silk and flowy pants and a checkered jacquard jumpsuit with a deep V opening.
Cadet is still a young brand, but it is gaining momentum. And if Raul Arevalo and Bradley Schmidt keep their eye on the ball and their vision intact, that momentum will continue.Source

One can trust the team at Timo Weiland (Donna Kang, Timo Weiland and Alan Eckstein) to make cool clothes for a creative class of consumers, but this season they raised the bar.

Backstage before the show, Eckstein cited the brand’s usual points of reference — New York City and music from the Sixties — but emphasized a turn to more tailored pieces. Wide leg and narrow trousers were styled with matching blazers, which were worn over zip-up sweaters with chevron. Bomber jackets came in a gingham velvet and wool tweed. A European influence was felt with the playful berets and woven T-shirts. These pieces came in an energizing color palette — mashed-up cherry red with maroon and cobalt with kelly green.

What really elevated the line was the outerwear, which ranged from a plaid peacoat, which closed the show, to a wool car coat.
Similar to the men’s offering, the women’s looks were more refined than usual, with fluid wide-leg pants, tailored coats and a wrap skirt worn as a top.

Fortunately the brand shied away from its previous gloomy goth pieces and rejoiced in rich and vibrant colors of cream, navy, orange and brown. Blends of corduroy, nylon with velour tied into the retro theme.

Highlights included a hooded orange anorak with an embellished elbow patch, and an elongated turtleneck paired with a front patch pullover that exemplified the oversize layered effect.

While its roots in streetwear remain evident, Rochambeau continues to elevate its offering by adding a new dimension and modernizing the trends of the past with modern fabrics.Source


Good bye NYFW Men's till the next season, And getting ready for NYFW Women's!
Fashion